A girls’ cricket project in Redbridge, East London, was recognised for its success as part of the inner-city cricket initiative, StreetChance supported by Barclays, last week (Thursday 3 July).

The judges praised the coaches for their dedication in getting the project off the ground by running taster session at 18 sites. Essex County Cricket Board have supported the project and delivered a ‘Coach Support Workers’ course to teach the girls to umpire, score and coach. They have also introduced workshops on First Aid and also arranged a visit from Olympic hockey Bronze medallist, Chloe Rodgers.

They were also impressed how lead coaches Hannah and Saba have acted as role models and mentors for the girls, passing on advice regarding education, career plans an exam stress.  Some of the girls from StreetChance pictured below: 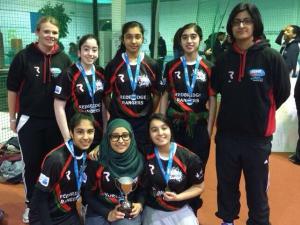 Speaking at the awards, Saba said, “It is a great achievement for the project, us as coaches, and girls cricket in general. Hannah and I wouldn’t give up, numbers weren’t great to start with but we stayed there, went to more schools and kept pushing the project. To win this award is a great feeling. It feels absolutely fantastic.”

Hannah added, “It’s amazing to know that the hard work has paid off. I never thought when I came to the StreetChance awards a year ago, and was inspired by the winners that day, that I’d be back picking up an award a year later. It’s absolutely incredible and is a great feeling.

“StreetChance has helped me massively and coaching has really helped my confidence. Throughout my Level Two course my feedback was always that I could be a bit louder. It’s been something that has gradually developed and I’ve become more comfortable as a coach.”

StreetChance is an inner-city cricket initiative run in partnership between the Cricket Foundation and Barclays which works towards positive experiences for young people: playing cricket leading to training, volunteering or secured employment. It aims to provide a diversionary activity that engages young people in communities affected by youth crime and anti-social behaviour and also break down barriers between diverse communities which have previously struggled to integrate.

Since 2004, Barclays has invested over £40m in sports facilities and sports programmes that support young people and local communities. Barclays’ support for StreetChance is part its wider ambition to build 5 Million Young Futures – a commitment to give millions of young people a platform to achieve their goals through access to enterprise, employability and financial skills.

Talking about the evening, Ravi said, “It’s been great fun. I’ve got a lot out of it and I hope the kids did too. That’s the key, it is all for the kids and bringing up the future of English cricket.”

Speaking from the event, Cricket Foundation Chief Executive, Wasim Khan MBE said, “The awards are an opportunity to celebrate the achievements and hard work of everyone involved in StreetChance and highlight the positive impact cricket can have on the lives of young people.

“It’s fantastic to have the opportunity to look back at what we’ve achieved over the last year and look forward to the future.”

Mike Saul, Managing Director, Hospitality & Leisure at Barclays Corporate, said, “Barclays has been investing in community sports for the past decade, working with partners like the Cricket Foundation to harness the passion young people have for sport and using it to help them develop the skills they need to be successful in later life. The StreetChance Awards recognise the remarkable achievements of these young people, many of whom have overcome significant challenges and are now role models for other young people in their communities.”

Find out more about Cricket in Redbridge here.