Shoppers in Ilford Town Centre on Saturday were in for a right treat as Redbridge Music Lounge was set up right at the heart of the hustle and bustle which offered a chance to sit down and enjoy some great music in the sunshine. If people hadn’t quite made it to the music, then they were being greeted by the illustrious Nutkhut stilt performers that were mingling with the shoppers and proving to be a great addition to the usual sights of Ilford.

It was the wonderful sounds of the talented musicians performing at Redbridge Music Lounge that perfectly complemented the glorious sunshine that had graced Ilford Town Centre on Saturday. Plenty of people stopped in their tracks to enjoy the music that echoed throughout the High Road.

One of the performers was 17 year old Ryan Green from Essex who treated his audience to a wonderful selection of songs. His final song was ‘Don’t Go’ by Josh Kumra, which he had previously sung for the likes of Kylie Minogue and Tom Jones when he was a contestant on the third series of BBC’s singing competition The Voice.

His soulful voice captured the attention of passers by who were then stunned by his musical talent as he not only sang but he showed off his skills on the keyboard. After his set, many people rushed over to congratulate him on a great performance. After he thanked and posed for photos with his admirers, I had the chance to ask him a few questions.

Wowed by this young man’s talent I had to ask him how long he had been performing.

“I’ve been performing since I was 12 years old. I started off with Redbridge Music Lounge, I like to get back to my roots to perform whenever I can”

Ryan truly means this as he also performed at the Christmas Light’s Switch on at Redbridge Town Hall!

After hearing Ryan’s covers of Frank Ocean and Example I was keen to know who his other musical influences are.

“Originally James Morrisson was a big influence on me and on my voice. But now, Frank Ocean is definitely a big influence, so they are my two main influences.”

Ryan also told me that he is currently at The Brit School, so I am sure that he will continue to excel at music and performing as he certainly put on a great show for the people of Ilford! 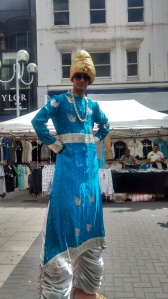 As I continued on my way through the High Road it was then that I saw the magnificent stilt performers, who were part of the Labyrinth Theatre Festival street entertainment. It was a sight you could not miss as they stood tall and proud, high above everyone else. Firstly it was the majestic maharajah who was causing many of the shoppers to avert their gaze upwards as they craned their necks to take in his full gloriousness. He was draped in a mesmerising blue gown and had a very golden turban to suit his attire that was clearly fit for royalty. As he walked confidently down the street he attempted to include passersby into the world of a maharajah and make them part of his performance! His charming demeanour enticed many people, children especially who wanted to stop for a chat and a photo!

Following not too far behind were the more mischievous looking casual but cool DJ stilt performers wearing their baseball caps and jerseys who looked like they could cause some trouble for the maharajah! They walked down the street with not a care in the world, as if they were just blending in with the crowds.

I stopped to watch the stilt performers continue on their way, weaving remarkably comfortably through the busyness of the street and I waited until they had become just tiny dots above the heads of shoppers. I could still hear shrieks of laughter in the distance of each person who had just been caught by surprise at the sight of the tall figures.

The Labyrinth Theatre Festival continues until Sunday 29 June with performances all over Redbridge.  So don’t miss out, for more information visit the website.